I've kinda worked out how to start the beast on the first kick without being thrown over the handlebars (most times), warm or cold but it's still a mighty effort for my 63 year-old legs with titanium hip joints on both. So, anything that will minimise the firing-up effort is worth considering. Someone has come up with an electric start for BSA A10's which is worth a little more investigation in the future. But for now, keeping with the general theme of the bike, I'm going to fit this BTH electronic ignition, replacement unit in the hope that a stronger, more reliable spark will improve starting. It's a fully self-contained unit that requires no external power supply (just like a Magneto) but it has an external, small coil mounted on a floppy stainless bracket. I'm sure I can come up with a neater way of fitting it.

Polished up and mounted, it looks neat and purposeful. You can see the removable pin that locks the spindle in the fully-advanced position while you set up the engine to 32 degrees before TDC.

The BTH unit has internally programmed, automatic advance and retard so the original, mechanical bob-weight advance mechanism is now redundant. I'll eventually remove it and replace the drive cog but for now I've just spot-welded the arms to lock it in the fully retarded position.

A downloaded an image of a timing wheel from Google was printed onto thick paper and a tapered paint brush handle pushed through it into the hole in the end of the crank. A couple of bits of sellotape fix the disc well enough to the wood. A little paper arrow held in place with a magnet indicated the piston position at 32 degrees before top dead centre - full advance.

I fixed the teeny-weeny coil to the head-steady mount and refitted the tacho pick-up to the HT lead. Not sure if the tacho will work on the very high tension of this unit but if not I'll re-program the tacho to receive a coil signal.

RESULT - An absolute transformation. No kick-backs (so far), easier starting, rock-steady tickover, smoother power through the rev range and I'm sure it'll be far more reliable.

It is sometimes inevitable that you have to run wires or cables along frame or chassis tubes, often secured with a cable tie or tape around the tube - not nice. The wires from the BTH magneto up to the coil had to follow the front frame tubes. I found these discreet little self-adhesive clips for round tubes that are only about 12mm square and can hardly be seen. I wrapped the cable with a few turns of CBS cloth insulation tape to build-up the diameter for a secure fixing.

Original Vincent oil filters are made from wool with a wire mesh core. This was obviously before the days of modern cartridge filters but Vincent experts reckon they're at least as good.
Incidentally, I have discovered that there are two versions of this filter - different lengths - one at 3 5/8" and one at 4". The short one is for Comets and the longer one for V Twins. I found no mention of this fact in any Vincent literature or other information. I was sold a 4" one as a Comet filter and was very confused for a while until I read the two dimension options on a supplier's website where both are sold as Comet filters.

Anyway, here's the filter fitted by the folks who rebuilt my engine. A cartridge filter with a thin rubber sealing washer on each end. In theory, a worthwhile upgrade.

... and here's the sealing face of one end of that filter - an unfinished, rough cast surface at the bottom of the filter housing. Oil enters the housing through the (highlighted) hole at the top, should travel through the filter and out to the engine through the central hole at the end. But to expect a thin rubber washer to seal adequately on such a rough surface and prevent any oil from bypassing the filter is, at best, optimistic. The wool filter, however, is compressed about 6mm along it's length upon assembly, and would, in my opinion, offer a far better seal on this rough casting.

Here's the oil after 300 miles - black and very metallic looking.

... and the magnetic sump drain plug with a significant coating of steel particles. But maybe this is to be expected from a new piston and liner?

Here's the new oil after 80 miles with the new wool filter installed - more like what I would expect.
Kinda confirms my theory that for the first 350 mile of my rebuilt engine's life, some of the oil has been bypassing that cartridge filter. Hopefully, no harm done.
**********
QUICK TIP. Most plastic containers like Yoghurt pots and Butter trays will dissolve if you use them for glues, paints and thinners - but not Milk Cartons. We save 'em all - 1 litre, 2 litre and 4 litre, cut them down and use them as disposable trays for glues, paints, resins and solvents. We haven't found anything to touch them. Salad Cream and Ketchup bottles are pretty good as bench-top 'Gun-wash' or Thinners containers too.
**********
Once you get a niggle in your mind that something is not quite right with your machine, that noggle shouts at you whenever you look at the machine and is the only thing you see. Your mind will never be at rest until the 'problem' is corrected.
One of my niggles on the Norvin was the Trident kickstart. It worked fine and mechanically, is the perfect part for the job. The top end and most of the shaft are OK but it's the area around the bottom joint that displeased me - it's just not elegant. The bottom of the lever is crudely and agricultural and it has an ugly, plated steel Cap Head bolt holding it to the poorly-finished, rough and ugly shaft mount.
Time to start some judicious material removal and radiusing of some edges, starting with a 60 grit flap disc on my Makita cordless angle grinder. 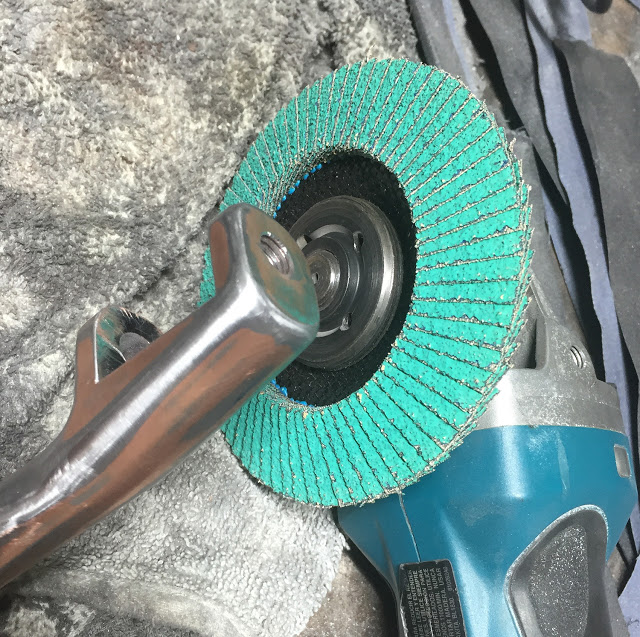 Then onto a 50mm Scotchbrite disc on an Air Die Grinder. 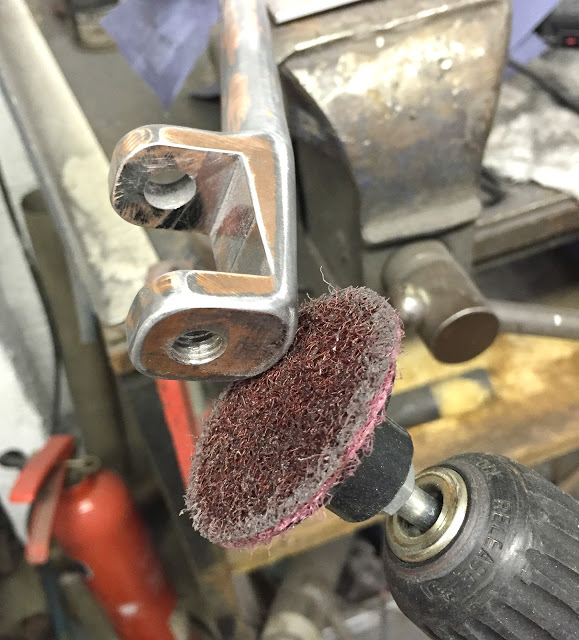 I used some 240 grit, 50mm wide Emery Cloth to round-off the shaft and external radii. You can see the original copper plating becoming exposed as the high spots are levelled down.

A regular needle file on the left and a tungsten, half-round file are both useful for removing the cast surface finish. 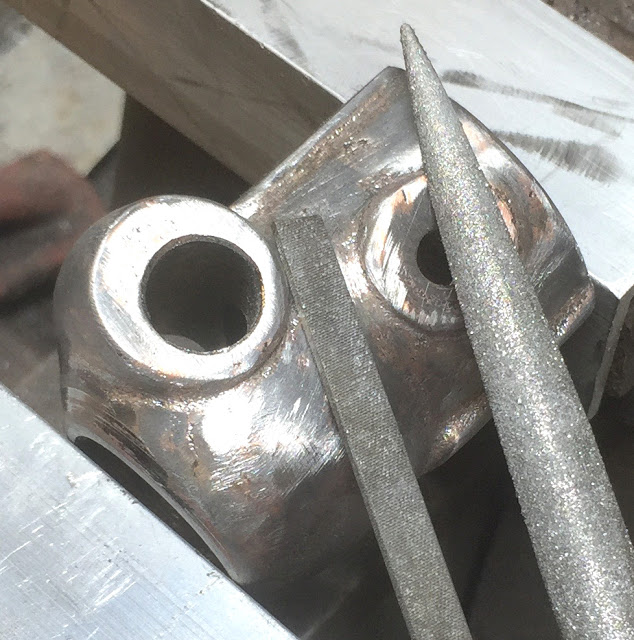 Here's the modified one on the left with a domed M10 hex bolt, alongside the original on the right.

The kickstart is a Triumph part and the gearbox is BSA. Although the shaft diameters are the same, the BSA shaft has a deeper cut-out for the cotter retaining pin. I dug around in my workshop and found an offcut of gauge plate, probably left over from a Marconi tool room job forty five years ago.
I made a 1/16" thick shim to build-up the cut-out to the correct dimension for the Triumph kick start.

I used an Ashford Chrome Plating company and was disappointed with the customer service and plating quality. It's OK though - better than the original.
**********
Some things niggle-away, almost subconsciously until the reason rises to the surface and you have to do something about it. The 'Oberon', bar-end mirrors are beautifully made and work perfectly but the modern, sharp, machined look and the anodised finish just don't sit in well with the rest of the machine. Problem is, polishing anodised aluminium isn't easy. Anodising leaves a hard surface that is quite difficult to remove - even with good quality wet and dry.
I have a small bench grinder which has a 6" Scotchbrite disc on one end. This, plus an hour or two of hand fettling with Wet & Dry then polishing, had them looking suitably period and in harmony with the general style of the bike.
Another show and another 'Best Cafe Racer' award.
That'll do for this post. Next up? Five speed gearbox and electric start? Maybe. 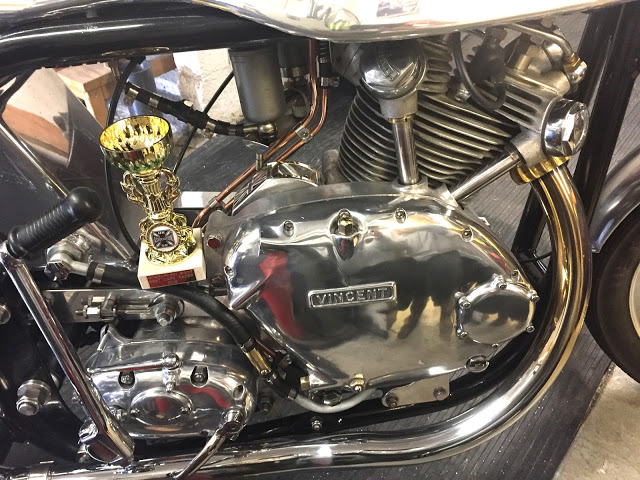