The Comet engine's maximum revs are lower than the 650cc BSA so the bike could do with slightly longer legs. I made some enquiries with a company called Nova Racing who offer a 5 speed gear cluster with a choice of ratios but none higher than the 4 speed's 4th gear. The engine is not short of torque and I won't be thrashing around a track on it so I'll pass on the 5 speed for now. Instead, I've decided to go for a 20-tooth gearbox sprocket to replace the standard 19-tooth one fitted. This will, in theory, increase the speed by 5% for the same revs. If, after that, even longer legs were still needed there is still the option of a smaller rear wheel chain sprocket. It's a bit suck-it-and-see.

The standard, four-speed A10 gearbox on the bike is OK but it still whines a little in third and still has a niggly leak on the chain side. So - for a quick and easy change-over, I thought I'd look around for another gearbox to strip and rebuild. I saw this one at a Bike jumble recently for £160. It was grubby and drained of oil but all the external nuts and shafts looked in remarkably good nick apart from some surface rust - probably due to some wet bike jumbles. I started stripping it down and found most of the internals too, to be in pretty good condition, with the exception (strangely) of the kickstart pinion which is totally knackered. Although there was not a drop of oil inside, everything was gummed-up with a sticky coating of something that prevented free movement of the internals. All the gaskets looked absolutely original

and all the nuts and screws were finger-tight. Hmmm... the mystery thickens.....

Almost as if the oil had all boiled away leaving a sticky glue on all the components that made it difficult to separate them. I eventually got it all cleaned off with gun-wash thinners. Here's the knackered kickstart pinion. The original part had probably, at some time, been cannibalised and replaced with the worn one, possibly explaining the loose nuts and bolts.
Hardly a sign of wear. And it looked like the original inner cover gasket. 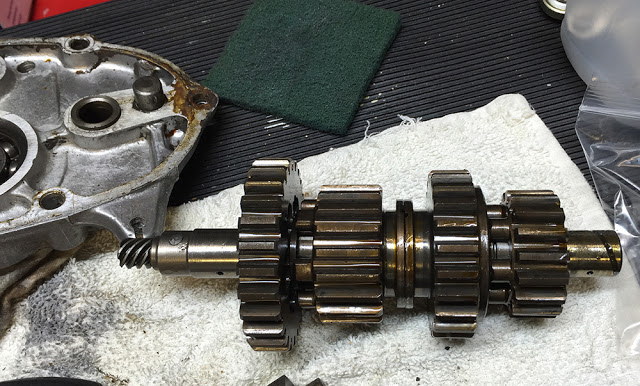 It was drilled into me as a young Marconi apprentice - 'REMOVE SHARP EDGES'. It was written on every drawing and repeated throughout the manufacturing planning documents for every aircraft component made there. It wasn't just a safety thing - sure they didn't want us to slice our pinkies when handling and assembling the parts. But it's all too easy for a sharp edge to wear through some adjacent wiring insulation with disastrous consequences at 30,000 feet.
Anyway, it has stuck with me. Any sharp edge that I see or feel has to go. The sharp edges of the BSA gearbox casing were left untouched after machining at the factory so, thirty minutes with a fine file had them removed and rounded-off.
I'm not into adding bits of 'Bling' just for the sake of it and I'm not particularly interested in originality, so dressing and polishing a rough casting neatens and tidies the look of it - to my eyes anyway. I've probably covered this process before but here it is again. 'Scotchbrite' abrasive discs are brilliant for removing casting imperfections and moulding marks.
I start with a 100mm disc on a velcro pad in my angle grinder. Then on to 50mm discs in my air die-grinder.

These, sand-cast gearbox casings were made long before the days of Japanese, mass, precision die-casting so it's no surprise that the profile of mating components do not match perfectly (thankfully, the mating faces do).

There's enough material on the castings to blend the castings to a flush fit with a Scotchbrite disc. Here, I'm working down through grades of abrasive paper before the final polish.

I used the rounded end of an artist's paint brush, wrapped in Wet & Dry to remove the cast texture in the more difficult corners. First 240 grit, then 400 then 800.

... then a felt bob on a mandrel wiped with Solvol Autosol.

..... and a 1" diameter felt disc with Solvol in my Dremel gets into tight spots

Ta-daaa. A couple of hour's work on this area of the casting got it to this stage. That's good enough.

It's mostly true that you get what you pay for so, credit where it's due....... I thought I'd try this stuff and it is Amazing. OK, it's about £9 for a small pot but it's by far the best and easiest to use that I've found so far. 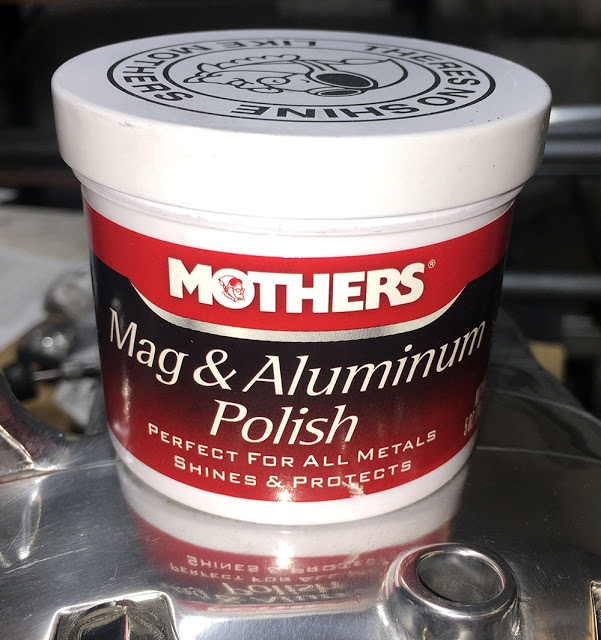 **************************
When you take a close look at a BSA gearbox it's no surprise that they all leak oil. There is really only one oil seal - on the output shaft, sealing around the chain sprocket and against the main bearing outer race casing. It's held in place by a large circlip. There's a reasonable chance of making a seal around the sprocket but the seal's questionable design leaves me with doubts about it's effectiveness around the edge and against the bearing. So, I added a tiny bead of gasket sealer all around the outside edge to seal between it, the bearing and the casing.
Again, if the bronze bush in the output gear is in good nick, then SRM's combined seal / nut should make the output shaft oil tight. A smear of gasket goo on both sides of the washer wouldn't go amiss.
However, I think that the main oil leak culprit is behind this sprocket, where the selector fork shaft goes through a 3/8" hole in the main casing (in the middle of the picture below), secured with a grub screw that locates in a groove around the shaft. The shaft does not rotate - it just sits there in a clearance hole so there is neither a bearing or a seal to prevent oil creeping along the clearance between the hole and the shaft and dribbling out behind the sprocket. If the bike is left on it's prop-stand (mine has no centre stand) it's likely that the hole is below oil level. Hence - leak guaranteed.

I thoroughly cleaned the shaft, it's hole and the grub screw thread with gun-wash and assembled the shaft dry. I then pumped sealant into the screw hole to feed around the groove and along the clearance between shaft and hole. I was surprised how easily the sealant made it's way to the outside of the casing indicating a fair bit of clearance around the shaft. Some sealer probably made it to the inside of the casing too but there's no way of cleaning it off so I have to hope that it'll cure and just stay there. I cleaned the screw and installed it, further pressurising the sealant.

This is the gearchange quadrant pivot pin - just located in a hole in the casing with no seal and with the potential to leak. I can't say that I've noticed a leak from here but it's situated behind a flange, out of sight with the box installed.
Cleaned and sealed.
... and another. This is the retaining thread on kickstart stop peg inside the outer cover. It's just installed through a hole in the inner cover with a spring washer and plain nut on the outside. Belt and braces - a plain washer with sealant and a nyloc nut. The excess sealant wipes off easily.
New gaskets with a light smear of sealant on all sides should take care of the inner and outer covers but these gearboxes have no seals on either the kickstart or gearchange shafts. They rely on the oil level being lower than the shafts and minimal oil turbulence inside the kickstart chamber.
To be fair, leaks around these shafts hasn't been a major problem. Maybe a slight weep over hundreds of miles but nothing that justifies the machining exercise of installing seals on the shafts.
Check out the neat, cast 'BSA' inspection cover I found on ebay.

I replaced all the studs, screws and nuts with stainless ones and 'blinged-em-up' a bit on the polisher.

Right - ready to swap the box. I'm hoping that the machined dimensions on both boxes are identical so that I can re-use the spacers. They're all different sizes and fit in specific places. I've already stamped them for identification. You can see a nut on the chain side of of the top mounting stud at the bottom of this picture.......

....... and here it is after modification. Because the new sprocket has one extra tooth, it's diameter is slightly more than the original - and it fouled the original nut. So, I silver-soldered the nut to the stud thread and machined it down in the lathe to about 16mm diameter x 3mm thick. Just clearing the chain. i have since machined two flats on the round head for a 1/2" spanner

Here's an old trick I'd forgotten about. Drill through two old clutch plates - a friction one and a steel one and bolt them together. Fit them temporarily and they'll lock the inner and outer clutch housings while you tighten the centre fixing nut.
All back together, adjusted and set-up.
...... and off for a test ride through the local lanes. The box seems much smoother than the old one and just one tooth increase on the output sprocket has transformed the feel of the ride. The Revs to MPH is now about the same as my BSA RGS - a lazy, mid-revs cruise at 55 mph. There's plenty of torque available in all the gears from really low revs so no need to go for a 5 - speed conversion.
..............................and an arty pic 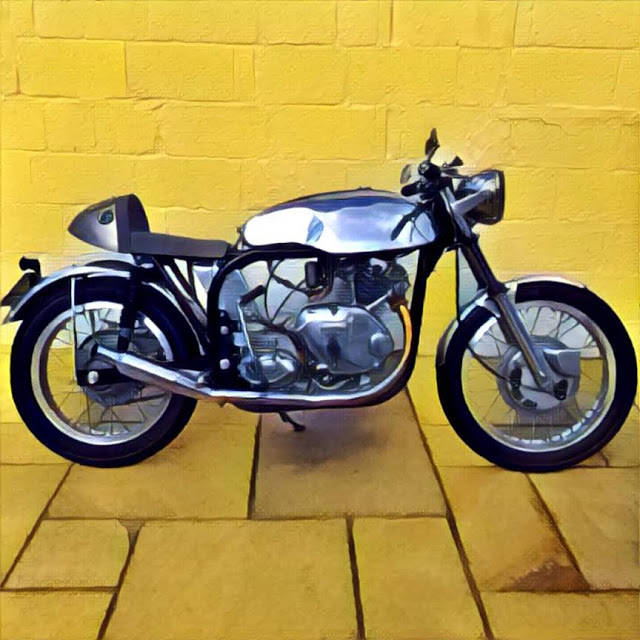 The leak-proofing procedure seems to have been successful so, here's the box that came out of the NORVIN - all stripped and ready for inspection and rebuild. It'll eventually replace the leaky one in my RGS. Here we go again.