The crap winter and spring weather finally cleared and it warmed-up enough for this old wimp to venture out for an MoT and a few shake-down runs. A couple of niggly oil leaks were dealt with and I eventually sussed how to start the engine on the first kick (or two) without being launched over the handlebars - Tickle the carb until fuel drips from the overflow hole, full choke, quarter throttle and one hefty kick, standing on the left foot-rest with the bike on the prop stand.
I used the MOTOGADGET's 'Teach' function to calibrate the speedo - Drive along a straight road for ten seconds at 30mph after pressing the button. Easy-peasy and spot on. I'll have to bend the speedo mounting bracket a few more degrees to aim the dial more directly at my face - there's a little too much glare from sky reflections to read the digital display easily.
So, how does it ride? To be honest, I was expecting to return from my first ride with raging back-ache, my fillings shaken out and with pins and needles in my hands. Not so. The thump of a big single is there but it's a smooth thump which transmits to the handlebars and frame just enough to communicate all the required information to the rider. The low-rev torque is a joy and the standard BSA gearbox ratios work well throughout the rev range. I've never been one to thrash the living shit out of any engine so the Comet's power band suits me to the ground. Neither have I ever been fond of scraping the footrests around corners but I was instantly reminded how well the Norton frame manages 'the wigglies' without a murmur. My choice of straight, Vincent handlebars has, so far, been a success. At speeds of over thirty five-ish, wind pressure on the chest takes much of the weight from the wrists making a sixty-mile ride a pleasure and pain-free.
Despite fitting SRM's gearbox output shaft oil-seal, one particularly annoying gearbox leak constantly dripped on the rear chain, flinging tiny specs of black oil on the mudguard and seat. I don't fancy removing and stripping the box at this stage, although it will have to be done at some time (maybe with a five-speed conversion?) so I opted to test out a new CBS product - LUCAS TRANSMISSION FIX. This stuff is marketed as an Auto-Box additive but can be used in manual boxes to 'Reduce leaks, reduce wear and smooth out operation'. I drained the old oil, which I was pleased to see, was pretty clean and free of metal dust and suspended particles and filled the gearbox to the level with the new product. Result? Leak reduced and a third gear 'whine' also reduced. Fair enough.
Total miles so far - about twenty. 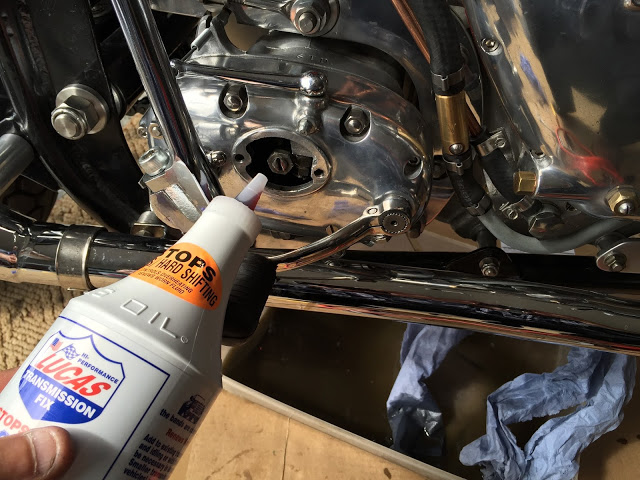 I found myself with a few hours to kill on a reasonably dry and warm Saturday afternoon so I thought I'd take a ride to Bike Show near Ashford - about thirty miles away, where a friend had a bikers clothing stand. (check out 'Taffy Morgan's Clothing Emporium' for some wild T shirts and other bikers gear). The bike performed faultlessly and the rain held-off all but for a few spots.