Many Berkeleys have been rebuilt over the years with Mini engines which, in my opinion, are just too big for this pretty little car. They invariably sit too high and usually have an ugly bonnet bulge. However, the previous owner of my car had already made a start on the project and had chosen Honda's, water-cooled CX500 'V'-Twin engine. It's 1982 vintage but still a relatively modern replacement for the original 328cc Excelsior two-stroke twin. It's been mounted in a Mini subframe and a plan devised for the Honda's shaft drive to deliver the power to the single rear wheel. It had all been roughly assembled to prove the principles but never driven. I'm generally happy with the basic concept - some things are pretty much how I would have done them but for some others, I would have taken a different path.

I've cleared a comfortable working space (gotta have comfort these days) and installed some amazing new flat panel LED lights in the ceiling (gotta have light too). I had my eyes lasered a few years ago so I can still see and read the smallest detail - but only if I have enough light!! And I've treated myself to an Electro-hydraulic motorcycle lift - it's perfect for this project. The engine's sitting in the subframe and, at the moment, the body is still perched, partly on a pallet and a couple of axle stands. 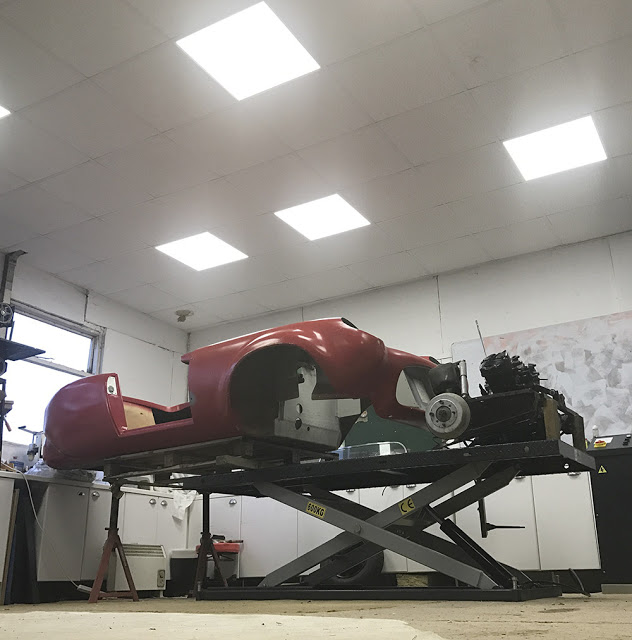 So, what have we got here? Berkeley bodies were originally an assembly of three or four separate glassfibre panels, bolted and riveted together with folded aluminium panels for inner sills, bulkheads, inner wings and cross-members. It was all pretty lightweight and quite fragile but corrosion eventually led to replacement and modification. The previous owner of GSV 610 had already made a pretty good job of bonding all the panels together and has reinforced critical areas with steel tubes and frames.

I've stripped a few parts from the engine but you can still see how nicely it sits in the modified subframe. It'll need no change to the car's original ride height nor any bulges in the bonnet. The original Mini drum brakes and rubber cone suspension are still there, augmented by a couple of small Vespa dampers and the drive shafts are, of course, gone - leaving just the stub axles in the hubs. The front wheel arches have been 'bulged' - though not excessively, to accommodate the wider track of the Mini front geometry. At first I wasn't sure, preferring the flat-sided original but it's kinda growing on me, adding just a tad of 'muscle' to the Berkeley's petite prettiness.

The pedal box is from a 2CV. It's small, light and neat and has a cable clutch and tandem master cylinder with an integral reservoir. The aluminium bulkhead and wheel arch panels look original but most of the original instrument holes and switch holes in the dashboard have been re-glassed in. Two angled, steel plates have been bonded and riveted along the length of the floorpan, linking the front bulkhead to the rear wheel well. There's a folded channel, 'cap' (not shown) for the top but the bottom is open - for exhaust, brake and fuel line, maybe? There are steel tubes glassed into the 'A' posts with a welded cross-tube under the dash. The hole below the clutch pedal is for the prop-shaft, which runs through pillow block bearings, inside the car, alongside the 'tunnel' - not in it.

......and here's the rear wheel well - reinforced and much stronger than the original moulding. There's a glassed-in, steel cross-member and heavy steel mounting plate alongside the end of the 'tunnel' with holes for mounting a bearing carrier for the propshaft. You can see a specially made aluminium fuel tank on the right.

Here, I'm laying on the floor beneath the car looking up into the wheel well. You can see the red propshaft bearing carrier on the left and the swinging arm mounts on either side of it. Shock mounts are in the middle of the picture. It all looks solid and strong without being too agricultural.

I must admit to knowing very little about the Honda CX500. The Japanese bike scene hadn't really kicked-off when I abandoned two wheels for four in about 1973 but this engine seems an inspired choice for a Berkeley. With 4 valves per cylinder, 10:1 compression ratio, 9750 rpm redline and 50 horsepower it's a marked improvement over the original 328cc, two stroke twin. It's compact, has an integral 5 speed gearbox with shaft drive and is relatively simple technology that my aging noddle can easily understand.. The previous owner told me that it came from a bike with only 30,000 miles on the clock but needed a new head gasket. It was given a top end overhaul and ran like a dream. A little internet research has revealed it to be rugged and reliable so I think I'll run with it.

I remain to be convinced, however, about the Mini subframe choice. A tubular spaceframe would be my instinctive first choice but, OK, I can see the attraction. Proven design of about the same era, cheap, easily available parts and it seems to fit very nicely beneath the Berkeley's bonnet and wheel arches. What is worrying me more is the mounting method of the subframe to the GRP body.
There are six mounting points for the subframe to the body. Two holes at the front corners of the subframe, for bolting to bonded-in brackets either side of the front grille opening, two drop-down steel pillars that are welded onto steel plates, glassed-into the underside of each wing and bolted to the subframe turrets each side.

Front, left hand subframe to body mounting.
Here I'm looking up inside the right hand wheel arch at the turret mount, strongly glassed-onto the inside, top of the wing.

....... and two holes in the rearward arms of the subframe (at the very bottom of this picture), that bolt through a steel plate which is glassed into the floor pan at the bottom of the front bulkhead. I get it that these six fixing points are adequate to fix the body to the subframe but the centre of gravity of the engine is way forward of the turrets and I don't believe that the the forward fixings are up to taking their share of torque movements under hard acceleration, braking and cornering. Maybe I'm being a little anal about it. Truth is, I won't be racing or even thrashing around on the road so it could all be OK as it is. More thought required.

You can see here the Fiat Cinquecento steering rack mounted to a steel plate welded to the subframe. It looks suitable for the job although the track rods seem a little long. Steering geometry should be close enough for the limited suspension travel but I'll check it anyway.

I've given it all a wash down with 'gun-wash' thinners and a stiff brush but eight or so years of grime, corrosion and surface rust won't disappear that easily. The white spots on the black engine parts are actually corrosion breaking through from beneath the paint so I reckon a bead-blast is in order.

This is the gear selector mod that converts it to a cable change with a sequential lever somewhere along the tunnel. 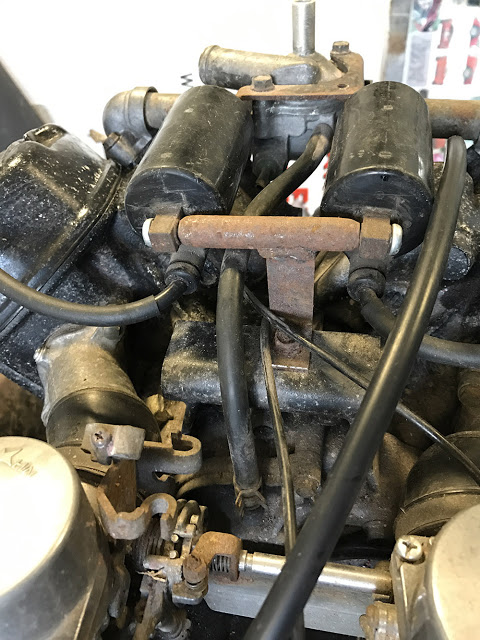 I've always maintained that the seats must be the starting point when you're designing and building a car and installing column and pedals. So here are the two that I sorted before I moth-balled the project several years ago. GRP buckets once destined for a Vincent MPH, trimmed in black Connolly leather. Nice. 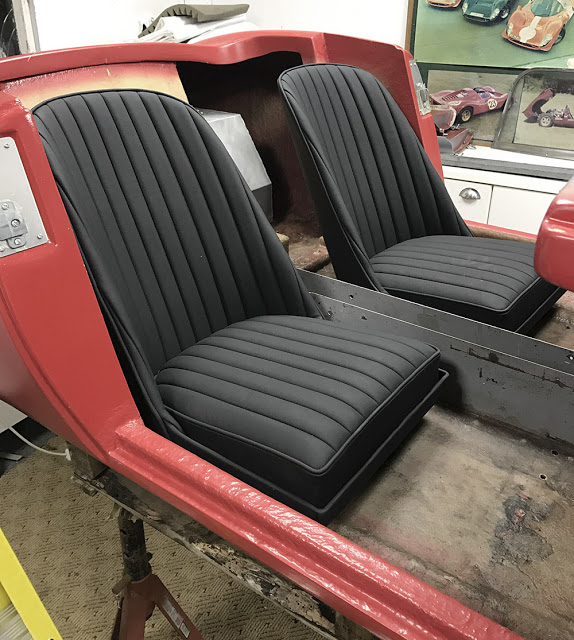 ....and this is a Quaife reverse gearbox with an engine-driven input flange and an output flange that reverses propshaft direction with a push or pull of the black lever. It's big, bulky and heavy and is designed to handle bike engines with up to three times the power of my Honda CX. It'll have to fit somewhere in the drivetrain. Maybe there's something smaller available these days. Well, at least I'll have five reverse gears to play with.
.....and a couple of chrome Berkeley badges. 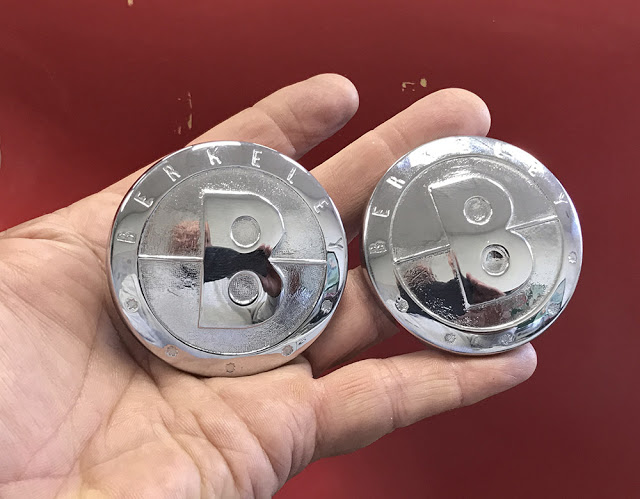 OK - let's get on with it.
Comments
Leave your comment Close